Some things in life come back to haunt you, but if you are lucky, some things come back to make you kvell.  (For those of you unfamiliar with this Yiddish word that has no English counterpart... it is from the German quellen, and the closest translation I can give you is to swell with pride, or gush.).  I had such a kvelling  experience recently.  It involved something I did 35 years ago while teaching at the University of Florida.

Recently two of my essays were published in Slices of Life, a collection of short fiction and essays published by the Florida Writers Association (FWA) in conjunction with Peppertree Press. The book was released during the FWA conference on October 22, 2010 in Orlando, Florida. 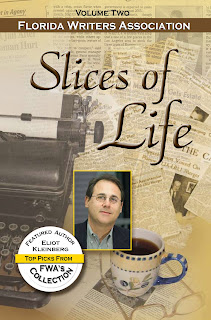 At a book signing for the authors, I asked the “person of renown,” the published author who was chosen to pick the top ten stories from those accepted for the collection, to sign my book. The young man, Elliot Kleinberg, is a journalist with ten published books to his credit. The conversation went something like this.

Kleinberg:  You are the Sunny Fader who taught at the University of Florida, aren’t you?

Kleinberg:   You don’t remember me, do you?

Kleinberg:    I was one of your students.

Not only was he one of my students, but he told me, and a number of other people at the conference, that most of what he learned about writing he learned from me, and I was the reason he went into journalism and became a writer.

There is probably no greater "high" than learning, first hand, that something you did made a positive difference in someone's life.  Elliott (that's him  towering over me during the conference) said he enjoyed my broadcast writing class so much, after graduation he went into broadcasting.  However, it was the writing aspect he enjoyed most, so eventually he became a newspaperman and nonfiction author.  I confided in  him that, even though I spent most of my life in television, it is the writing I love most too... and now that I have the luxury of pursuing that passion, I am writing essays and books.

I have heard from a couple other former students I have led (or misled) into a career in the entertainment or journalism industry:  Jack Herman, also a former UF student of mine, followed me to Hollywood and is still there, working in "the industry."  And recently I heard from Lisa Hackett (Buddy Hacket's daughter), who was a student of mine at Pepperdine University, and now has her own production company.  If there are any other former students of mine out there who happen to come across this blog, I would love to hear from you.  On Facebook, or you can email me at sunnyfader@tampabay.rr.com.
Posted by Sunny Fader at 10:37 AM