In my last blog I talked about one of my gurus, Ted Huntley. Today I’d like you to meet another of my gurus. Her name is Hollie Wallis.

Hollie was eight years old when I met her, a terminal patient at St. Jude Children’s Research Hospital in Memphis, Tennessee. In May of last year (2009) the St. Pete Times published an essay I wrote about her. For those of you who have not had an opportunity to read the essay, I have included it below. For those of you who have read it, I thought you might like to see what Hollie looked like and get some sense of who she was from her own words. 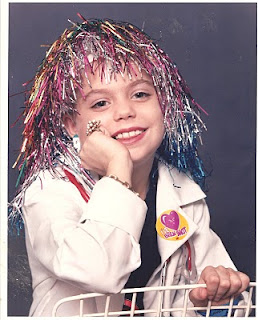 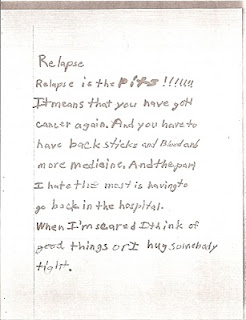 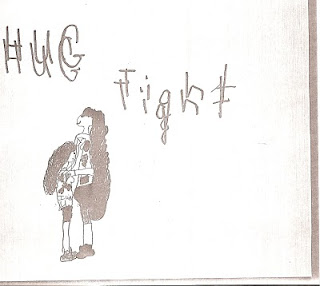 Hollie's definition of "relapse," some of
her art work, and a bit of her humor. 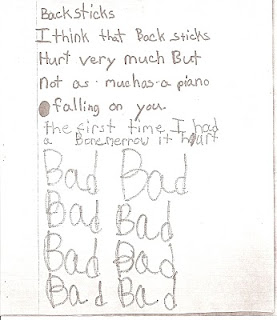 I would have notified Hollie’s mother, Martha, about the essay, but I had no idea where she was living. Shortly after the article appeared Martha contacted me on Facebook and sent me the following note.

"I just received a copy of an article you wrote about Hollie. She would have been so proud as am I.
Sunny, you will not believe how I received your article. (by the way, its great to see and hear from you) Thanks to fb, I have reconnected with a friend who now lives in Texas. She has recently remarried and was telling her husband about Hollie when she decided to do some research on her and came up with your article. She sent me the link and I found you.


I didn't write Hollie's story as I should have. I have tons of letters and fan mail from the documentary and continue to get letters on occasion, which would have made her so happy that people remember her. It makes me feel good that she made such an impact on everyone. She certainly was a special young lady.


I'm back in Corinth. I'm a nurse and worked and lived in Memphis for years specializing in oncology. I work with elderly people now and seem to have found my niche' as they say.


I will write more, so good to reconnect with you. Much love to you also, Martha

I also got a note from Hollie’s cousin.


"Hollie and her mother are cousins of mine. I was extremely close to them before, during and after that tragedy. A friend of ours from Houston, TX found the St. Petersbury Times article dated 5/24/09 and sent a link to us yesterday. I wanted to tell you that reading your article made me feel as if our precious Hollie had walked right back in the room with me. I shook and then cried and am still crying off and on today, but I wanted to tell you what a gifted writer you are and how much I appreciate your remembrance of Hollie. It means more to her family than you can know. Thanks you. "


Post script:
After I posted this I received the following note from Martha

"Sunny, I will pass along your website and I know everyone will be as glad to read this and see the pictures as I am. I wish you would write her story, I know that I can't. Her birthday is this coming Fri. she would have been 32. Can you imagine? This is such an opportune time for you to write the blog. Got to get moving, I'm off tonight so as usual I have tons of stuff to do. Oh and I love the story and pictures. And the notes from Hollie."


And now for those of you who haven't seen the essay... here it is

Bearing witness to a child's life

By Sunny Fader, Special to the Times

The multicolored wig fashioned from glittering metallic strips, the bright red lipstick and the blue nail polish on ring-adorned fingers, the spiked heels and outrageous earrings all bore witness to 9-year-old Hollie Wallis' determination to compress her teenage years into the next 12 months. She knew that that was all the time she had left.

For three years Hollie Wallis fought for her life against AML, a virulent form of leukemia. Now the battle was over. The doctors at St. Jude Children's Research Hospital in Memphis had run out of possibilities. And I was there to ask a favor of her: Would she consent to letting me and my film crew document her final months?

Documenting a child's struggle against cancer was one thing. A child might die; I knew that going in. But if there was a chance for survival, there was hope. It didn't make my work as a writer/field producer for the hospital's fundraising TV special easier, but it did make it possible.

I tried to prepare myself for the meeting, but what do you say to a little girl who knows she is dying? How do you ask her to share this most intimate of experiences with millions of people? Suddenly there she was, wearing a pint-sized white doctor's coat, a miniature stethoscope around her neck. Before I could say a word, she smiled up at me and announced that she had decided to let us tell her story.

My first thought was that maybe Hollie didn't really know she was dying, but her mother, Martha — a delicate, soft-spoken woman with eyes red-ringed from hours of crying (always out of her daughter's sight) — assured me she did.

"Don't confuse Hollie's good spirits with denial," Martha told me. "She knows perfectly well what lies ahead, and she is determined to squeeze as much living as she can into every day while there is still time, while she is still feeling well enough."

Over the next year the television crew and I visited with Hollie and her mother and older sister again and again, during good times and bad. We spent her last Christmas with her, a day that started off joyfully but was shattered by the painful, unrelenting advance of her disease. We were with her when she celebrated her 10th birthday at the hospital with the staff and fellow patients, something no one thought she'd get to do. And we were with her near the end, when, against her doctor's better judgment, she finagled permission to allow us to take her to her boyfriend's coming-off-chemo party.

I watched Hollie struggle to muster smiles for everyone, but shortly into the celebration she was forced to retreat in pain to our van. There, in the back seat, she curled up with her mother and melted into tears.

Why, I wondered, even when she was in such pain, did this child continue to allow us to intrude on her life? One afternoon, while we were sitting on the sofa in her living room waiting for the lighting to be set for the next shot, I asked her.

"Because I'm afraid," she said.

A few months after Hollie died, Martha was giving her house a thorough cleaning. When she cleaned under the sofa she found a note from Hollie. There was another under the cushion and one tucked under Martha's underwear in the dresser. For weeks Martha kept finding these notes hidden around the house. The discoveries were painful for her, but she understood.

That day on the sofa, when Hollie told me about her fear, I wanted to reassure her. She didn't need a television documentary to leave her mark on the world. I had seen the impact this remarkable bundle of energy and love was having on the people whose lives she was touching. I saw it in her nurses and doctors and in the patients she befriended, and their families. I saw it in the eyes of our producer and the men on our crew. I tried to tell Hollie, but I doubt that she believed me.

I hope in some way she understands now, because here I am, two decades later, still thinking about her, and her words. To matter, to be remembered, isn't that all any of us want?

Sunny Fader is a freelance writer who has spent much of her career as a writer and field producer for television projects for St. Jude Children's Research Hospital and other nonprofit organizations.